Somerset House has been playing a pivotal role in the last years in combining modern (e.g. located inside the building, The Courtauld Gallery features an extraordinary collection of Impressionists and Post-Impressionists paintings) and contemporary art, promoting a multidisciplinary approach to exhibition-making.

As an example of this curatorial endeavour, I recall Daydreaming with Stanley Kubrick, which ran from 6 January to the 24 August 2016: a surreal, psychedelic and multisensorial experience inspired by the visionary work of the American film-maker and curated by James Lavalle, founder of the Mo’ Wax record label.

North: Fashioning Identity, which ran from 8 November 2017 to the 4 February 2018, was co-curated by SHOWstudio’s editor Lou Stoppard and Adam Murrey, academic and lecturer at Manchester School of Art and Central Saint Martins, with the purpose of exploring the intersections between fashion and identity in Northern England.

The exhibition then “explore the ways the North of England is depicted and celebrated in photography, art and fashion” by featuring artists such as Alice Hawkins, Humphrey Jennings, Jamie Hawkesworth, Jason Evans, David Sims, David Ellison and fashion designers Raf Simmons and John Alexander Skelton.

Before the visit, I wrote down on my notebook two questions, hoping to find answers and have a better picture about North England: Which role do media and fashion play in portraying the North? To what extent do visual communication influence our perception of gender roles?

As Stoppards says in an interview for British Journal of Photography, “In the mid-2000s there was a resurgence of interest in work that explicitly referenced Northern England,”  “Agyness Deyn [who was born in a Littleborough, Manchester] was becoming quite a successful model and practitioners like Alasdair McLellan [who was born in Doncaster] were becoming recognised names, and their work constantly referenced the North. Then things like Brexit happened, and there seemed to be a resurgent interest in what the North actually is now. People wanted to recognise the North more and explore it again.” 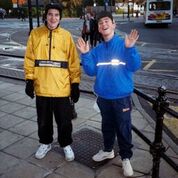 The exhibition also investigates masculinity in Northern culture, mainly focusing on collective rituals and heteronormative tropes. For example, Welsh photographer Jason Evans captured two cheerful and bold teenagers in their signature uniforms: the series, part of a project that registered Evans’ work as a stylist and casting director in the early 1990s, documents the influence of street style on teenage boys.

This raw and authentic approach to photography perfectly conveys the essence of street culture: magazines feature editorials where the everyday is celebrated, where the boundaries between staged and real are blurred, aiming to engage with the consumer through visual codes and motifs.

In doing so, the photographer provides an alternative way of capturing identity as connected to an idea of personal branding,  far away from the glossy allure of fashion magazines. Evans’ way of reasoning is reflected in an interview which could be viewed in the exhibition about the collaboration between himself and stylist Berwick-upon-Tweed-born Simon Foxton.

Following a similar pattern of enquiry, Brighton-based photographer Ewen Spencer‘s images, including Teenagers, are a powerful commentary on the construction of identity through interactions in public spaces such as pubs, clubs, bars and stadiums.

Manhood, as depicted in these images, seems to be definied by social rituals like drinking and showing off a certain amount of boldness and rough attitude.

To conclude, the exhibition successfully reaches the goal of providing a nuanced celebration of the many aspects of Northern identity, without avoiding to acknowledge  the importance of the countryside and the rural heritage as a source of inspiration for artists like Alasdair MCLellan and David Ellison (Tek Hod).