In order to open up a wider discussion with the public on religion, identity, popularity, Brexit in Grayson Perry’s work the learning team of Arnolfini together with curator Claire Doherty organise a series of volunteer-led tours on Saturday afternoon (12.00 to approximately 12.45 starting from the foyer).

As I volunteer I was encouraged to pick a theme that resonates with me and I decided to look at the ways in which Grayson delves into the thorny horizon of masculinity, from his personal experience as a crossdresser to the vases (Object in Foreground / Shadow Boxing) to the tapestries (Digmoor Tapestry).

While I was creating the mind map for my tour, I thought about my methodological approach, seeking a more interactive participation and object-based response from the viewers (e.g: What elements on the vase strike your imagination? Can you spot Alan Measles?).

The Most Popular Art Exhibition Ever gives us a glimpse into the eclectic world of the Essex-born artist Grayson Perry. Through a wide range of medium, Grayson seeks to investigate themes that are considered ‘ elephant in the room’ in contemporary society like gender, identity, sexuality, politics, using the lens of a social commentator.

What about masculinity then? What about gender stereotypes? Grayson does not want to provide an alternative model of masculinity, rather scratching beneath the surface to examine the vulnerability of the contemporary (British) man.

Why do men have to affirm their masculinity embracing an outdated macho stereotype? Men look at each other so much, being obsessed with an idealised man. In the end, as Grayson points out in his book The Descent of Man (2017: 4), man not unlike women perform their gender and sometimes tend to confuse their biological features (sex) with their acts and behaviour (gender).

Moving back to the tour, I decided to focus my discussion on the artworks displayed in Gallery 1, creating a correlation between the Kenilworth AM 1 and the vases (Shadow Boxing and Object in Foreground). 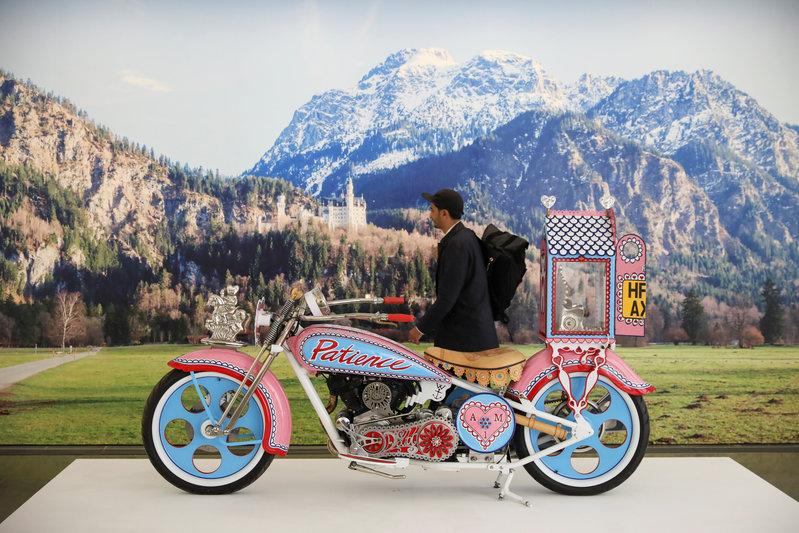 Djuric, M. (2017) A man walks past Kenilworth AM1 at the press preview of Grayson Perry’s “The Most Popular Art Exhibition Ever!” show at the Serpentine Gallery in London, Britain, June 7, 2017 [electronic print.] Available from: https://www.reuters.com/article/us-britain-election-art/british-artist-grayson-perry-explores-a-divided-country-in-new-exhibition-idUSKBN18Y1BV [Accessed 24 October 2017].

‘As I pedal past up the hill, I see the father in the distance. He is standing silently next to his mountain bike, arms folded across his chest, staring at his son two hundreds metres down the hill. He also looks angry. I have seen that father’s face on a thousand football touchlines, outside school gates. It’s a face that says, ‘Toughen up, don’t whine, be a man’.

Kenilworth Am1: The bike questions the stereotype of the rough biker: at a first glance, you can notice that the bike is emblazoned with hearts and pink components rather than with skulls and flames. Furthermore, Grayson covered the Kenilworth with the words humility, chastity and patience to provoke the viewers and their perceptions of gender roles on how a biker should look like or act.

Kenilworth Am1 was designed to become a shrine of his teddy bear Alan Measles, which he took on a journey to Germany in 2010 in order to reconcile with his childhood ghosts. Growing up with tough and toxic fatherly figures, Grayson found solace and protection in Alan, which became one of his main inspirations.

During his road trip to Bavaria, he encountered a dad forcing his son whining and crying to man up and hide his emotions: this attitude can be compared to the tragic commentary on the laddish drinking culture and the effects that unemployment had on many men unable to cope with failure in Northern England, themes of Shadow Boxing.